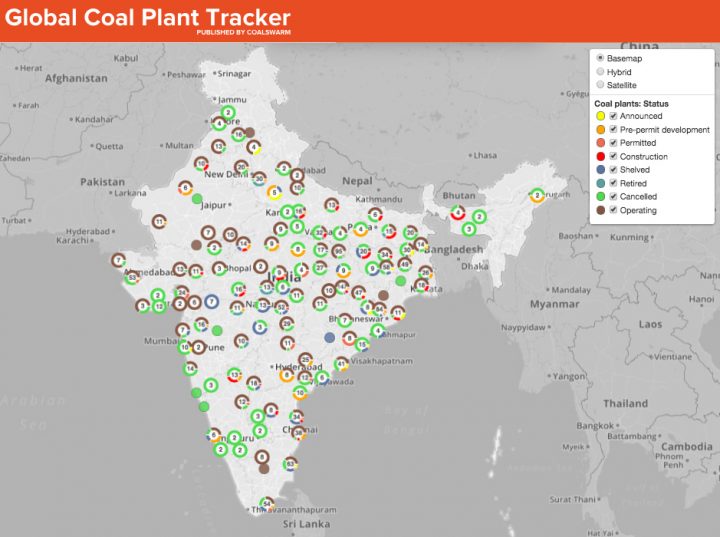 Irvine, Calif., April 25, 2017 – India will not be able to meet its Paris climate agreement commitments in the coming years if it carries through with plans to construct nearly 370 coal-fired power plants, according to University of California, Irvine and CoalSwarm researchers.

“India is facing a dilemma of its own making,” said UCI associate professor of Earth system science Steven Davis, co-author of a study published today in the American Geophysical Union journal Earth’s Future. “The country has vowed to curtail its use of fossil fuels in electricity generation, but it has also put itself on a path to building hundreds of coal-burning power plants to feed its growing industrial economy.”

Further, by developing all of the planned coal-fired capacity, India would boost the share of fossil fuels in its energy budget by 123 percent. If the nation also met its goal to produce at least 40 percent of its power from nonfossil sources by 2030, the total power being generated would greatly exceed its own projected future electricity demand.

India has pledged to the international community to reduce the amount of carbon dioxide released per unit of gross domestic product by as much as 35 percent from 2005 levels by 2030 and to increase renewable energy in its power grids. The construction of 65 gigawatts’ worth of coal-burning generation facilities with an additional 178 gigawatts in the planning stages would make it nearly impossible for India to fulfill those climate promises, the researchers said.

“In looking closely at all of India’s active coal plant proposals, we found they are already incompatible with the country’s international climate commitments and are simply unneeded,” said the study’s lead author, Christine Shearer, a senior researcher with CoalSwarm. “These plants therefore risk either locking out the country’s renewable electricity goals or becoming stranded assets operating well below optimal rates and leading to financial losses.”

Davis added: “We’ve done calculations to figure out that India’s Paris pledges might be met if it built these plants and only ran them 40 percent of the time, but that’d be a colossal waste of money, and once built, there’d be huge incentives to run the plants more despite the nation’s contrary climate goals.”

India relies heavily on coal; 70 percent of the country’s power comes from plants burning the fuel. Because of its historically low cost and accessibility (India has large domestic coal reserves), it’s seen as furthering India’s quest to become a manufacturing and economic powerhouse and as a way to provide electricity to the roughly 300 million people in the nation who don’t have it.

But the UCI and CoalSwarm researchers stressed that there are significant downsides to the fossil fuel habit. In addition to spewing harmful soot and other types of air pollution coal-burning power plants are the largest source of carbon dioxide on Earth, accounting for 41 percent of all CO2 emissions in 2015. Choices that individual countries make in regard to their energy mix have planetwide consequences.